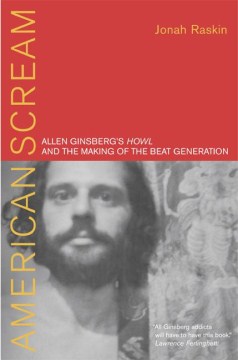 Allen Ginsberg's Howl and the Making of the Beat Generation

Baker & Taylor
Examines the confluence of personal history and political, cultural, and social factors that inspired Ginsberg's controversial poem, as well as the evolution of the Beat movement in 1950s New York and San Francisco.

University of California Press
Written as a cultural weapon and a call to arms, Howl touched a raw nerve in Cold War America and has been controversial from the day it was first read aloud nearly fifty years ago. This first full critical and historical study of Howl brilliantly elucidates the nexus of politics and literature in which it was written and gives striking new portraits of Allen Ginsberg, Jack Kerouac, and William Burroughs. Drawing from newly released psychiatric reports on Ginsberg, from interviews with his psychiatrist, Dr. Philip Hicks, and from the poet's journals, American Scream shows how Howl brought Ginsberg and the world out of the closet of a repressive society. It also gives the first full accounting of the literary figures—Eliot, Rimbaud, and Whitman—who influenced Howl, definitively placing it in the tradition of twentieth-century American poetry for the first time.

As he follows the genesis and the evolution of Howl, Jonah Raskin constructs a vivid picture of a poet and an era. He illuminates the development of Beat poetry in New York and San Francisco in the 1950s--focusing on historic occasions such as the first reading of Howl at Six Gallery in San Francisco in 1955 and the obscenity trial over the poem's publication. He looks closely at Ginsberg's life, including his relationships with his parents, friends, and mentors, while he was writing the poem and uses this material to illuminate the themes of madness, nakedness, and secrecy that pervade Howl.

A captivating look at the cultural climate of the Cold War and at a great American poet, American Scream finally tells the full story of Howl—a rousing manifesto for a generation and a classic of twentieth-century literature.
"Jonah Raskin's American Scream adds to the ever-growing fact and fiction of the Allen Ginsberg persona. All Ginsberg addicts will have to have this book for adulation and reassessment."--Lawrence Ferlinghetti

"Howl remains a genuinely magical poem, not least because its profoundly subversive power has enticed a significant part of several generations into reading it. American Scream does a superb job of setting the story of its creation and reception in a rich historical context. In so doing, Jonah Raskin illuminates much of American art and culture in the second half of the 20th century, and the visionary, contradictory, wonderful soul that was Allen Ginsberg."--Dennis McNally, author of Desolate Angel: Jack Kerouac, the Beat Generation, and America

"Like an Olympic marksman, with steady and unwaivering focus, Raskin has set his sights on what is without doubt the most influential poem of the second half of the twentieth century. When Ginsberg read the poem in public for the first time in 1955 it was clear that he hit the bull's eye, as has Raskin with his brilliant study."--Bill Morgan, author of The Beat Generation in San Francisco

Try searching for American Scream to see if PPL owns related versions of the work.