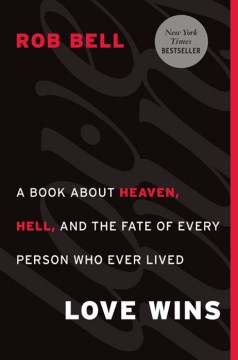 A Book About Heaven, Hell, and the Fate of Every Person Who Ever Lived

"Bestselling author of VELVET ELVIS and the 2 million-plus selling Nooma videos, Rob Bell, reveals a secret deep in the heart of millions of Christians-they don't believe what they have been taught are the essential truths of their faith. Out of respect for their tradition, they keep quiet, confiding to a few close friends their doubts and questions about salvation, Jesus, and, of course, God. Is Jesus really the only way into heaven? Is God "good" if he is planning on sending billions of people to eternal torment in hell? Are Christians the only ones who have it "right," and everyone else is just deceived? Bell brings out to the open and faces squarely the questions on everyone's mind: Does it really make sense that God is a loving, kind, compassionate God who wants to know people in a personal way, but if they reject this relationship with Jesus, they will be sent to hell where God will eternally punish them forever? In LOVE WINS, Bell goes to the heart of these issues and argues that the church's traditional understanding of heaven and hell is actually not taught by the Bible. Bell is emphatically not offering a new view of heaven and hell-instead, he closely examines every verse in the Bible on heaven and hell and shows what they really teach. And he discovers that Jesus's most fundamental teaching about heaven and hell is, "Love wins.""--Provided by publisher.
Publisher: New York, NY : HarperOne, 2011
Edition: 1st ed
ISBN: 9780062049636
0062049631

A half star for this book is to generous. It's heresy plain and simple. This is a work of theology made in Rob Bell's image rather than based on the revealed word of God. Test all things against it. Hell is real, real people go there, and thank God He grants us free will. No one is accidently in hell or heaven. Judgement is real, God's wrath is just as real as His grace. He desires that none should perish, He takes delight in no ones death or separation, He want's all people to repent and believe in the work of Christ. For the forgiveness of sins and eternal life.

This is not a good book. I found it nearly impossible to figure out the author's point because the layout and writing are so extremely awful.

First, the book is printed in a sans-serif font which is never ever easy on the eyes. The paragraphing makes no sense at all. Just when you think someone made the stylistic choice to begin each sentence on a new line, you find a paragraph where this isn't true at all. Sometimes, you find this bit of formatting idiocy:

Will everybody be saved,
or will some perish apart from God forever because of their choices?

Yes, that line break after "saved," is in there.

And as to an answer to that question, "Will everybody be saved...?" who the hell knows? It's impossible to tell because the author has chosen, in the name of not alienating anyone, not to give a clear answer.

Almost every paragraph - I use the term loosely - begins with a conjunction which is so irritating that I swear I will never do it again, even in the most casual email. The writing is shot through with sentence fragments which makes the reading jumpy and painful.

Here's another little bit of fluff I came upon: "...God announces 'I am making everything new.' At the end, something new. The last word, it turns out, isn't a last word but a first word. Or more precisely, another first word in an endless succession of first words. That's what God's love does: it speaks new words into the world and into us."

As near as I can tell, the author doesn't want God to have any standards at all and so everything is always going to be new (remember: the earth was perfect when it was new) and no one has to worry about doing anything wrong because, NEW!

The crap never stops: "Now back to that original question: 'Does God get what God wants?' is a good question, an interesting question, an important question that gives us much to discuss." Then get freaking busy and discuss it, please, because saying it's "interesting" and "important" and "good" isn't getting anyone anywhere, except your printer's purveyor of ink.

The author asserts that these things are present in creation: grace, peace, love, acceptance, healing, forgiveness. The author fails to find need for confession, penance, right behavior, acknowledgement of sickness, and repentance. In short, what he wants to bestow on everyone is Bonhoeffer's cheap grace: "Cheap grace is the grace we bestow on ourselves. Cheap grace is the preaching of forgiveness without requiring repentance, baptism without church discipline, Communion without confession.... Cheap grace is grace without discipleship, grace without the cross, grace without Jesus Christ, living and incarnate."

The author eventually gets around to telling us what he thinks we want to hear: we humans get what we want. He tries to turn it around and say that if we want bad stuff, we will get bad stuff. It's starting to sound an awful lot like "The Secret."

Not sure if the contents really match the title of this book. Still worth reading.

Though I didn't necessarily agree with everything Rob Bell writes in this, I appreciated his effort to get people thinking.

with all the hype surrounding this book, i thought it would come with some intense radical message, but i was unimpressed. the author says a lot about nothing. the book could have been much shorter, and you'd still get the same message. after reading the book you don't have an answer about "the fate of everyone who ever lived". in fact, the author himself doesn't seem to have an answer...which is perfectly fine, except that he wrote the book to answer these questions and when you read the book you come to find out that he has none. he wraps the book in interesting personal narratives and biblical references, but in the end you find that you're exactly where you started.
thoroughly, thoroughly disappointed.

For those unaware, this book has caused substantial dissonance in the North American Christian (primarily evangelical) community. My comments express concern chiefly with Bell's methodology. For a good example of a more substantial review check out: http://thegospelcoalition.org/blogs/kevindeyoung/2011/03/14/rob-bell-love-wins-review/.
Rob Bell is uber-creative. His style is easy-going which provides a feeling of security for the reader as he pokes and prods deep matters. He strums many of our heart-strings (e.g., wonder at this world, value of people, the tragedy of hatred, encouragement to do good). He is brilliant communicator. I am fairly certain that you will find yourself enjoying parts of this book no matter who you are. The difficulty with this book is that it is not purported to be a book of fiction. As a result its message must be evaluated ultimately on its consonance with reality - as best as we can determine it - not on aesthetics. With this in mind, three general concerns emerge from my reading of this book. First, Bell seems to be playing the postmodern language game viz a viz Wittgenstein, Ayer, et al. His brilliant creativity is marshalled, in this cash, for ill. He takes words, words which in most cases offer accessible common sense meaning, and redefines them to suit his purposes (e.g., "age", "life", "death"). In doing so, he opens up what is for me a legitimate slippery slope. If he can redefine words, why can't I? If he can redefine words, how can I be certain his definitions are true (can I even ask that question?)? Second, he employs a distinctly Socratic method but in so doing fails to appreciate its sophisticated nature. He buries the reader in an avalanche of questions and Biblical references which at first glance appear impressive. One realizes, however, that he merely quotes and questions. We all have friends that act this way. When asked for his opinion on a movie, for example, we hear something like, "Come on! Was it good? What do you think, man! Come on!” This is, of course, accompanied by all kinds of gesticulations and facial expressions making it obvious that he is communicating something but unable to get to the point. Neither Platonic dialogue nor Kierkegaardian pseudonymous writing, perhaps the best illustrations of the Socratic method, are ever satisfied with innuendo as Bell seems to be. In the end, after utilizing various questions and quotations, they offer argumentation to back up the implications of the questions and quotes. Bell never offers argumentation other than a sort of weak emotivism (e.g., “I think we like such-and-such of a story better.”). Finally, Bell practices a dangerous game of reductionist dilemma-creation. He seems to regularly conclude that the depth and profundity of the question of human destiny can best be explained by reducing each aspect of the matter to a choice between only two questions. The way to break down a dilemma is to, of course, offer a viable third alternative. This is fairly easily done with Bell’s dilemmas (e.g., Is God our friend or is he someone who in the end will declare that we deserve to be separated from him (102)? Could God act in such a way that offers friendship while remaining true to his entire nature, including holiness?). In the end, I can’t help but wonder, given the plethora of cogent criticism offered on his book, whether Bell was simply trying to stir the pot; not to teach, but rather to challenge certain Christian assumptions.

A suprisingly easy read on a deep subject. Lots of biblical references to back up his points. Very positive.