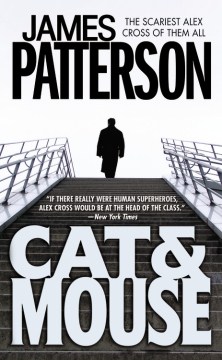 Almost 2 separate novels, one with Gary Soneji who wants to murder Cross and his family and the other with the violent 'Mr. Smith' with his live autopsies on his victims. I find it odd that Patterson chooses to write in the first person for three different characters and occasionally even switches to a third person viewpoint.
There was certainly lots of action and suspense but it was not my favorite Patterson novel thus far.

I like many Patterson books. I did not like this one. It was far too graphic and violent for my taste. I just could not handle it at all. I stopped reading after three chapters into part 2.

These books have some good points - Alex Cross is a likable character (as are most of the other recurring characters), and there are some good surprise moments in the books. But there are plot points that don't add up, and dialog that doesn't make sense, and just basic things like a police detective and a school principal being able to afford hotel rooms at the Astoria in New York and fancy dinners. Sure, it was a beautiful, romantic scene that works really well for the book, but is it actually feasible in real life? Cross says he hasn't felt towards a woman the way he feels towards Christine since his wife died; as another reviewer points out, he said something similar in regards to the women he was with in the other books in this series. And finally, he's a high profile detective, a profiler of serial killers, and (apparently) his home address is easy to find out. Gary Soneji actually broke into his house and almost killed his children and his grandmother in a previous book. But does he move? Does he invest in a security system or, I don't know, some better locks on the doors? Obviously not, since someone BREAKS INTO HIS HOUSE, AGAIN, AND ALMOST KILLS HIS ENTIRE FAMILY, AGAIN!
There are two storylines going on in the book, two murderers - Gary Soneji and "Mr. Smith". The Soneji storyline is actually wrapped up about two thirds of the way through, and the Mr. Smith storyline gives us the big climactic scenes at the end of the book. It makes things a bit confusing, jumping back and forth between the two plots, especially with Patterson's style of switching from first- to third-person storytelling, and of switching from one narrator to another. The reader can figure out who is speaking, but it does slow down the flow of the story. Some reviews have complained about Patterson's short, 2-3 page chapters, but I actually like them. It gives you an easy stopping place if you're only able to read for short periods of time.
One last thing - I'm still not sure how I feel about the sort of sexual banter between Cross and Sampson. It's intended as good-natured ribbing, sure, and I realize Cross and Sampson have been friends since childhood, but I can't tell if it's supposed to be the sort of anti-gay joking-that's-really-a-warning that straight men often do. I really hope I'm misreading this, because it seems like in all other ways, the friendship between these two men is a really cool thing.

Very creepy and violent. I like the Alex Cross detective novels though. They are very well written and hard to put down.

Again really am enjoying this series of books.

An okay read, not the best but it was a great twist in knowing who was chasing how.

A few contridictions from previous books but still good.

Probably deserved a higher rating from me, but I am comparing it to other Alex Cross novels I have read so far. This is the worst one so far. However, the other ones were so good that it is a tough comparison. One thing I like so far about the series is how Patterson delves into minds of the criminals in the story. I actually like those chapters better than the ones told by Cross. In this book, that is not done as much.

Frightening or Intense Scenes: As usual, Patterson creates another criminal who is deranged. Mr. Smith is sick.

Violence: "Mr. Smith" brutally kills his victims by performing autopsies on them. Also, Gary Soneji goes on killing sprees. These are not described in as graphic detail as usual by Patterson, however.

Coarse Language: A little bit of swearing. Not too bad.

Sexual Content: Alex Cross hooks up again. I understand that Cross battling the ghost of his wife's passing is part of the story line, but sometimes I thing that Patterson is trying to make him out to be James Bond. Does he really nedd to go into detail about Cross's sexual exploits?

DirtyHarry55 thinks this title is suitable for 16 years and over

Escaped murderer / kidnapper / psychopath Gary Soneji resurfaces to settle a score with Alex Cross. At the same time, there is an international murderer dubbed "Mr. Smith" buy the press. Alex Cross becomes an unwilling participant in the solving of the Mr. Smith case while dealing with Soneji.