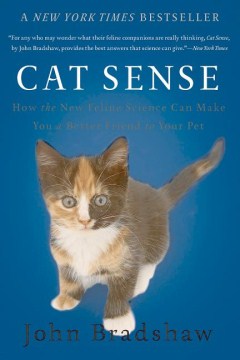 Grand Central Pub
Based on cutting edge science, this bestselling book on the inner lives of cats is "for any who may wonder what their feline companions are really thinking" (The New York Times).
In Cat Sense, renowned anthrozoologist John Bradshaw takes us further into the mind of the domestic cat than ever before, using cutting-edge scientific research to dispel lingering myths and explain the true nature of our feline friends.
Tracing the cat's evolution from lone predator to domesticated companion, Bradshaw shows that although cats and humans have lived together for eight thousand years, cats remain independent, predatory, and wary of contact with their own kind, qualities that often clash with our modern lifestyles. To live in harmony with our cats, Bradshaw explains, we first need to understand their inherited quirks including understanding their body language, and managing both their natural hunting instincts and their relationships with other cats.
A must-read for any cat lover, Cat Sense offers humane, penetrating insights about the domestic cat that challenge our most basic assumptions and promise to dramatically improve our pets' lives -- and ours.

Baker & Taylor
Draws on the latest scientific and behavioral research to explain the origins, evolution, and modern-day needs of domestic cats, revealing how an understanding of a cat's ancient instincts is an essential part of a healthy cat-human relationship.

This is an excellent book on cats and certainly of interest if you want to read more about the science of cats. The author is an anthrozoologist and thoroughly knowledgeable in regards to his subject matter. However, if you're interested in a light read, don't bother.

If you're looking for an introduction to some of the scientific research on cats, this is your book. It has a wonderful early section on the ancient history of cats. But I found the approach didn't really provide a lot of insights that might help us to be better cat guardians or address problems we might be having with our cats, which seemed to be implied in the title. I enjoyed some of the side panels, like "Catnip and Other Stimulants" (p. 115) and especially "The Rumble: How Cats Purr" (p. 194), which actually explains how that magic process works.

Slow-paced but chock-full of information. At one point the author says he wrote the bk on his computer; I could tell. Don't read this for the prose style; just for the info.

I disagree -- I'm having a great time reading it, and am reading it for the science—I have all the cat care books I need, thanks. Got halfway through before my loan expired, and am now on a very long wait list.

Contrary to the reviews, this is not an easy read. The word "science" in the title is much more accurate than the phrase "Make You A Better Friend to your Pet". It is less a "how to" book than a textbook covering all aspects of cats, mostly from a scientific point of view. It is what I would expect from a required text for a college course about cats and other domestic animals. There may be info that can "make" you a better friend to your cat, but is is not easy to find. Much more practical information is available in books that cover how to care for a cat.

"Not all cats respond to [catnip].... The behavior released by catnip is a bizarre mixture of play, feeding, and female sexual behavior, whether the cat itself is male or female. Cats may first play with a catnip toy as if they think it is a small item of prey, but they quickly switch into bouts of a seemingly ecstatic combination of face-rubbing and body-rolling, reminiscent of a female cat in season. Most cats also drool and attempt to lick the catnip. This behavior may continue for several minutes at a time, until the cat eventually recovers and walks away.... / A few other plants elicit the same response, notably the Japanese cat shrub or silver vine, and the roots of the kiwifruit vine, which despite its name originated in southern China.... Most species in the cat family, from lions to domestic cats, respond to these plants the same way, so the gene must have evolved several million years ago. Why it did so remains a mystery." (p. 115)

Loading...
PPL owns a similar edition of this title.