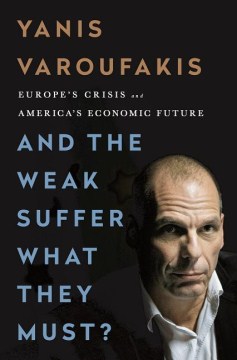 And the Weak Suffer What They Must?

A titanic battle is being waged for Europe's integrity and soul, with the forces of reason and humanism losing out to growing irrationality, authoritarianism, and malice, promoting inequality and austerity. The whole world has a stake in a victory for rationality, liberty, democracy, and humanism.

In January 2015, Yanis Varoufakis, an economics professor teaching in Austin, Texas, was elected to the Greek parliament with more votes than any other member of parliament. He was appointed finance minister and, in the whirlwind five months that followed, everything he had warned about-the perils of the euro's faulty design, the European Union's shortsighted austerity policies, financialized crony capitalism, American complicity and rising authoritarianism-was confirmed as the "troika" (the European Central Bank, International Monetary Fund, and European Commission) stonewalled his efforts to resolve Greece's economic crisis.
Here, Varoufakis delivers a fresh look at the history of Europe's crisis and America's central role in it. He presents the ultimate case against austerity, proposing concrete policies for Europe that are necessary to address its crisis and avert contagion to America, China, and the rest of the world. With passionate, informative, and at times humorous prose, he warns that the implosion of an admittedly crisis-ridden and deeply irrational European monetary union should, and can, be avoided at all cost.

Baker & Taylor
""The strong do as they can and the weak suffer what they must." --Thucydides The fate of the global economy hangs in the balance, and Europe is doing its utmost to undermine it, to destabilize America, and to spawn new forms of authoritarianism. Europe has dragged the world into hideous morasses twice in the last one hundred years... it can do it again. Yanis Varoufakis, the former Finance Minister of Greece, shows here that the Eurozone is a house of cards destined to fall without a radical change in direction. And, if the European Union falls apart, he argues, the global economy will not be far behind. Once America abandoned Europe in 1971 from the dollar zone, Europe's leaders decided to create a monetary union of 18 nations without control of their own money, without democratic accountability, and without a government to support the Central Bank. This bizarre economic super-power was equipped with none of the shock absorbers necessary to contain a financial crisis, while its design ensured that, when it came, the crisis would be massive. When disaster hit in 2009, Varoufakis argues that Europe turned against itself, humiliating millions of innocent citizens, driving populations to despair, and buttressing a form of bigotry unseen since the Second World War. Here, Varoufakis offers concrete policies that the rest of the world can take part in to intervene and help save Europe from impending catastrophe, and presents the ultimate case against austerity. With passionate, informative, and at times humorous prose, he warns that the implosion of an admittedly crisis-ridden and deeply irrational European capitalism should be avoided at all cost"--

Baker
& Taylor
Looks at the history of Europe's economic crisis and America's role in it, arguing against austerity measures and proposing policies to help Europe address its economic problems before an implosion of the European monetary union occurs.
The former finance minister of Greece shows here that the Eurozone is a house of cards destined to fall without a radical change in direction and offers concrete policies that the rest of the world can take part in to intervene and help save Europe from impending catastrophe. 30,000 first printing

a brilliant incisive analysis of the Euro and the fallout that it promotes and while some of the content could be taken as blaming the US , the author is clear that US was carrying Europe post World War II and it was only after it stopped and Europe's politicians being unable to grasp the nuances of macro economics of the new deal that they are in the situation that Europe finds itself. He is absolutely right that Europe is too important to be left to the politicians

The wonderful thing about the blame game is that everyone can blame everything on the USA, for instance, without ever owning up to individual and group complicity.
For example, without a substantial criminal element within each country, would America's CIA been able to engineer the coups in Iran, Guatemala, Brazil, Chile, and elsewhere? Hardly. [It's amazing how many times they either screwed up or failed - - it appears the Roosevelt boys, Kermit and Archibald Roosevelt, were far more adept at it than those who followed them?]
That does not excuse America, but it does place the situation in a more realistic perspective. To be historically accurate, the French branch of the Rothschild banking family were the ones who first proposed the Euro - - that in itself should have been enough to engender suspicion.
Today, the European Central Bank calls the shots, which evidently was the design all along, and evincing ignorance or surprise at this late stage can only be self-serving.

This book shed a bright light on the corruption that has been going on in the major players of the EU, like Germany, France and the UK. The Author is very well spoken and he wrights in an almost teaching manner where anyone could pick up this book and understand what he is talking about. The US is not far away from facing the same fate the EU is facing now. Very interesting read from an insider's view.

A heavy tome indeed. The book explains, Europe's in general and France and Germany in partcular, shenanigans with their currency. Unfortunately a currency debacle in Europe will have a global impact. The author explains in detais the games Europe and America play with their currencies and how it impacts the world markets.

A good history of the creation of the Euro, ruined often by a sanctimonious tone and Greek-indulgent perspective that gleefully omits the willful disregard of the Greek government's promises made to secure bailout loans.

Try searching for And the Weak Suffer What They Must? to see if PPL owns related versions of the work.