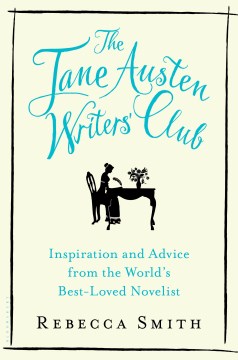 Inspiration and Advice From the World's Best-loved Novelist

Baker & Taylor
Examines the methods and devices used by the classic novelist and discusses the important aspects of fiction, including plotting, characterization, openings and endings, dialogue, settings and writing methods, culled from letters Jane Austen wrote to her nieces and nephews.

Pretty much anything anyone needs to know about writing can be learned from Jane Austen. While creative writing manuals tend to use examples from twentieth- and twenty-first-century writers, The Jane Austen Writers' Club is the first to look at the methods and devices used by the world’s most beloved novelist. Austen was a creator of immortal characters and a pioneer in her use of language and point of view; her advice continues to be relevant two centuries after her death.

Here Rebecca Smith examines the major aspects of writing fiction--plotting, characterization, openings and endings, dialogue, settings, and writing methods--sharing the advice Austen gave in letters to her aspiring novelist nieces and nephew, and providing many and varied exercises for writers to try, using examples from Austen’s work.
Exercises include:
*Show your character doing the thing he or she most loves doing. In the opening scene of Persuasion, Sir Walter Elliot looks himself up in the Baronetage, which is the Regency equivalent of Googling oneself. That single scene gives us a clear understanding of the kind of man he is and sets up the plot.
* Use Jane Austen’s first attempts at stories to get yourself started. Write a very short story inspired by "The Beautifull Cassandra," a work of eighteenth-century flash fiction.

The Jane Austen Writers' Club is a fresh primer on writing that features utterly timeless advice.

Baker
& Taylor
Shares writing advice from Jane Austen, including how to plan and plot a novel, how to develop characters, and how to write dialogue.

Try searching for The Jane Austen Writers' Club to see if PPL owns related versions of the work.