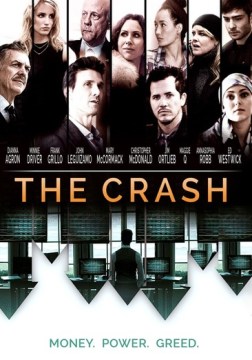 Some financial jargon in the film that require some basic fianancial market understanding such as short selling. Anyway:

We've spoken amongst ourselves and... We can't loan the people any more money... Without some incentives. The bank needs incentive to do their jobs? In '08, you gave us $800 billion. Maybe we start there.
===
The federal reserve was created to serve our interests... Not the current flavor
of the week.
===
So I'm looking at four of the five largest investment banks.
-Richard, give us our money.
She wants to cut a check to the people instead.
-The people are too stupid to know how to spend it.
Bill, we're on the same page. I took an oath to protect the financial system... And I'm sure as hell not gonna let the people control things.
===
I'm tracking this crash just fine. Leading the people into panic. What I'm not tracking, in order to get these short sales... To work, we've got to get the market back up and functioning.

Why are we at the circus? This is where the stock market was created. Come here. Now there are several theories, of course... But this is the one I subscribe to. It was a hot summer day in 1792... And four men sitting right over there, created-- they created a market place... Whereby people like you and I... Could bet on a working-class America... Through stocks and bonds. It was the greatest game ever invented. That's what they called it. And there were two clowns, performing an operatic... While they were being chased by a bear. Right there. And it was the clowns that gave them the idea. But the clowns had to outrun the bear. Well, he didn't have to outrun the bear... He just had to outrun the other guy. Cheers to the American dream.

We don't have a server big enough.
-What about Amazon?
We can't find a server big enough. We need 5% of the Internet. The fastest 5%. Zero latency bandwidth. We need Facebook or netflix.
===
That's the server. Over that barge. It's all mobile. We moved it every 3 to 5 days for security. What can I say, it worked for Saddam, until it didn't. And it's all nuclear-powered. And the only reason it's still here... Is we haven't figured out how to dispose of it yet.
-Oh, that's comforting.
Yeah, we cautioned the bush administration that this... Unit would be shut down even before they ever tested it. But no one likes to listen to what no one wants to hear.
-Listen to what?
That the banks... Would create their own backup systems privately. I mean, who do you trust less than government?
-Oh, I don't know. Banks?

The New York stock exchange is almost as old... As America itself... Being founded in 1792... During George Washington's first administration. 67 years ago, 24 men met under a buttonwood tree... At 68 wall street for the purpose... Of trading and government bonds. Wall street has become the symbol of money. Everybody, it seemed... Was on the way to becoming a millionaire.There were plenty of buyers. Not enough stock to go around. Wait your turn. It was unheard of. Those who shouted the loudest got in the firstest. And then all of a sudden, wham-o! The next day, the Piper had to be paid, and in full. The incredible boom became an even more incredible bust... As the country plunged into the depths of a depression.

AKA as A Conspiracy on Jekyll Island. The editing, camera work and sound are all wrong. The romances are unwelcome distractions but the premise is solid and based on a plausible conspiracy theory between the Federal Reserve and big banks. Recall those mysterious google barges that was believed to be "Data Bunkers/backup servers" that could survive catastrophes, particularly the ones in San Francisco Bay during early 2010s?

I reserved this movie because it has some very good actors. Unfortunately, they were completely wasted by an inane plot, poor camera work and direction, and a ham-fisted message about evil banks. This has to be the worst movie I've seen in years. Avoid.