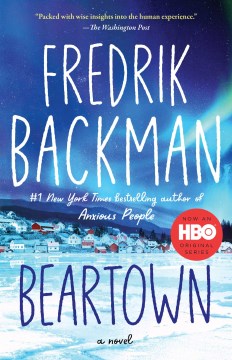 "From the New York Times bestselling author of A Man Called Ove, My Grandmother Asked Me To Tell You She's Sorry, and Britt-Marie Was Here, comes a poignant, charming novel about a forgotten town fractured by scandal, and the amateur hockey team that might just change everything. Winning a junior ice hockey championship might not mean a lot to the average person, but it means everything to the residents of Beartown, a community slowly being eaten alive by unemployment and the surrounding wilderness. A victory like this would draw national attention to the ailing town: it could attract government funding and an influx of talented athletes who would choose Beartown over the big nearby cities. A victory like this would certainly mean everything to Amat, a short, scrawny teenager who is treated like an outcast everywhere but on the ice; to Kevin, a star player just on the cusp of securing his golden future in the NHL; and to Peter, their dedicated general manager whose own professional hockey career ended in tragedy. At first, it seems like the team might have a shot at fulfilling the dreams of their entire town. But one night at a drunken celebration following a key win, something happens between Kevin and the general manager's daughter--and the next day everything seems to have changed. Accusations are made and, like ripples on a pond, they travel through all of Beartown, leaving no resident unaffected. With so much riding on the success of the team, the line between loyalty and betrayal becomes difficult to discern. At last, it falls to one young man to find the courage to speak the truth that it seems no one else wants to hear. Fredrik Backman knows that we are forever shaped by the places we call home, and in this emotionally powerful, sweetly insightful story, he explores what can happen when we carry the heavy weight of other people's dreams on our shoulders"-- Provided by publisher.
Publisher: New York : Atria Books, 2017
ISBN: 9781501160783
1501160788

"there are few words that are harder to expain then "loyalty".Its always regarded as a positive characteristic, because a lot of people would say that mwny of the best things people do for earh other occur precisely because of loyalty. The only problem is that many of the bery worst things we do to each other occur because of the same thing. "
One of the many, many thoughts I loved in this book.

I'm not sure how Beartown can be considered a humorous read; the rape of a young girl and ensuing results, including her ostracism and attacks on her family, are not topics I'd consider humorous.
The author's works are poignant, resonating and engrossing, but this book is not what I'd consider humorous.

Phenomenal! Writing and storytelling perfection. From the foreboding opening to its escalating crescendo, this book held me captive.

Backman used multiple point of views, character interactions, and misguided motivations to tell this story. From the seemingly inconsequential to the most vital, the author laid a foundation and planted seeds to bring the story full circle and it was mesmerizing.

Beartown had everything in it's pages. It was heartrending, witty, inspirational, and at some of its best/worst moments, emotionally devastating. The nuances were smart and subtle. In the end, this book was a dichotomy - at times, maddening and difficult to read, but equally hard to put down. Perfection

At first I was not sure whether I would finish reading this book as I was so angry at the community for being so sports captivated. However, I was soon caught up in the writing and the story. I could relate this book to real communities where the residents lives are lived around a single sport and those who play are idolized. When finished reading this I had to read the sequel to find out what happened next. Can fractured communities and families be healed?

This book has stuck with me for over two years. As the parent of athletes and a coach, I get angry when politics become involved in sports and bad behavior is excused as "boys will by boys." How about we are all humans? Beartown brings these issues to the reader and I'm glad that book clubs are taking this book on.

In Beartown, a small community isolated in the cold woods, hockey means everything. Hockey is who they are, and the whole country will know that once their star junior teams makes it to the finals. However, the star player is accused of raping a young girl. Everyone in the town is effected, and it's how they handle it that determines the town's fate.

4.5/5: Read this book. It's VERY character based, and slow-burn, but... Backman's writing makes it worth it. Every person effected in the town gets a narrative, and the way their morals (or lack of morals) are presented is so intriguing. All the characters are well developed in a simple yet complex way. The book is about ~400 pages, but it was so immersive that I didn't mind.

I love all the characters, but by far my favorite is Benji. I would read a whole novel based off Benji. He's reckless and carefree, but he has a deep and raw love for the things that really matter in his life. That's a dangerous combination for anyone, but... dammit I fell for it. I also have a special place for Amat and Maya. Both characters went through a lot of growth, and overcame a lot of difficulties in their lives. But they pulled through and stood up for themselves while protecting their loved ones, even if they were rejected by others. All the characters are really well written, and I appreciate how they all stayed true to their character while doing brave things. It's easy for a character to do something different for the sake of the plot, which makes it feel like they broke character. But every character had a logical reasoning to their beliefs and actions (a great example is Kevin's dad, or David, or Amat, etc). The only thing that seemed out of place was when characters would start saying some deep-philosophical thought; for some scenes, it felt out of character. But anyway, the ending. The climax had me SHOOK, I was so scared. But I'm happy with the ending. It seems perfect for a stand alone, but I still want to read the novel. Also, there are a lot of quotable passages in this book. Many sentences either made me stop and think or lingered with me for the rest of the day. The story dragged occasionally, and it's VERY slow burn, but I liked it.

What I Take Away: Life is lived in moments. What we do now impacts tomorrow and everyone around us. Also, strength comes from being able to stand tall when faced with fear. A strong person isn't necessarily the most popular person, rather, it's usually the opposite. It's the person who's willing to go against the crowd and stand up for themselves that's the strongest.

Buried under thick layers of philosophical talk about hockey is a pretty good story. I had to struggle through the first third of the book before it picked up. The end also dragged. I stuck with it because I enjoyed "A man called Ove," but Beartown was totally missing the dark humour that made AMCO so likable.

I really loved this novel about a town and it's hockey obsession. It's about a lot of things and although the hockey was in your face every page, it did what it was supposed to do on many levels: interest you, put you in the place and time, and keep you reading hoping for certain characters to prevail. Loved it.

It took me 150 pages to get into this book but when the story of the real character of Beartown finally percolates through, i realize why I needed to know so much about the boys on the team and the instinct to put team before everything else ( including morality). So for the non-hockey readers, stick with it; there is a very provocative novel waiting once you have ploughed through the hockey culture backdrop.

"The only time I'm not moving forward is when I'm taking aim."

We become what we are told we are. Ana has always been told that she's wrong.

You've never been alone. You just need to be better at choosing the company you keep.

"Staying silent in return for being allowed to join in."

"Sune has always been more interested in the length of the string than the size of the balloon."

"That was the morning the boy realized that the only way to become better than the bears at their own game was to stop playing it their way."

“She’s fifteen, above the age of consent, and he’s seventeen, but he’s still “the boy” in every conversation. She’s “the young woman”.

"There's a thin line between living and surviving, but there's one positive side effect of being both romantic and very competitive: you never give up." -p.123

“People sometimes say that sorrow is mental but longing is physical. One is a wound, the other an amputated limb, a withered petal compared to a snapped stem. Anything that grows closely enough to what it loves will eventually share the same roots. We can talk about loss, we can treat it and give it time, but biology still forces us to live according to certain rules: plants that are split down the middle don’t heal, they die.” - p. 138