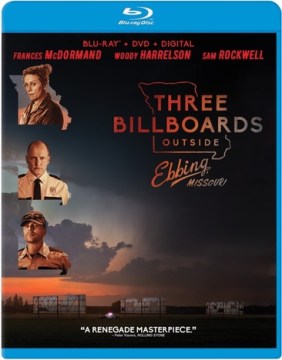 Excellent, no-holds-barred acting. Tough to watch in some parts, but gripping.
*SPOILER*
I liked the ending - how some things are still unresolved.

A powerful puzzle of a film, with a great soundtrack. Pairs well with Townes Van Zandt.

The movie title is misleading. The high level summary of the movie story didn't sound interesting to me. But after watching the movie, it's the script & the characters that makes the movie worth watching. If you've never been on the receiving end of prejudice or bullying then you may not relate to this movie. For me, it was nice to see the victim(s) standing up for justice & slowly seeing other people/bystanders stand up for justice. Some clever cinematography like panning down the back edge of a wooden billboard ... camera peeking forward from behind - film texture. FrancesM is awesome. My 1st time seeing Woody act in a serious/injured role - not bad. My 1st time seeing PeterD play a lonely, shy, vulnerable guy asking someone out on a date. Despite the dark topic, there are funny bits & just enough silliness to not make this movie a complete downer. Again, great script. "... Anger ... begets greater anger ..." "Penelope said 'Begets'?" (The short film in the Bonus material was weird. The young crazy dude reminds me of a young Brad Pitt.)

I did not enjoy this film, although some of my favourite actors are in it. There is too much polemic, having to do with race relations in Missouri, male chauvinism, police brutality and I don't know what else. The midget from Game of Thrones is in the cast, to show how callously the disabled are treated; it's a pity he has so little to do because he's a good actor.
At times I thought I was watching a Monty Python sketch, so loony was the action. A character with a beef against the police throws Molotov cocktails at the police station--really! I just felt sorry for Frances McDormand, Sam Rockwell, John Hawkes and all the other good actors in this lumpish movie.

Frances McDormand playing Olive Kitteridge, again, Woody Harrelson playing Woody Harrelson, a script that's hilarious when it's trying to be serious, pathetic when it's trying to be funny, acting that reflects sitcom characters not people, all larded over with language that seems to be designed to produce a certain ambience, a sort of low-life, hick setting but manages to sound only like a trashy, self-published attempt at a novel. A complete misfire.

Written, directed and produced by Martin McDonagh in 2017, this dark crime-drama delves into the struggle of a woman who calls attention to her daughter's unsolved rape and murder.
Although some people consider this as a dark comedy, I cannot find anything that much funny.
Superb are the performances of the veteran actors---Frances McDormand, Woody Harrelson and Sam Rockwell.
However, the script appears ill-contrived with an unfinished ending.

Although Three Billboards generally received high ratings, when it first came out, a group of audience members and critics who should have known better lost their collective minds. What, a film with some racist characters set in the U.S. South that was not About! Racism!? No black central character? No unmitigated baddies? No courtroom scene catharsis, like in A Time to Kill and To Kill a Mockingbird? While never quite admitting it, they were expecting predictable "good for you" Oscar bait. Another group refused to see it at all, because they assumed it WAS classic Oscar bait, and a simple-minded guilt trip about racism. Because Martin McDonagh, author of the Tony Award nominated The Pillowman and director of In Bruges is all about Oscar bling. Honestly, the slightest familiarity with his work would have told them to expect the unexpected. So if that sounds intriguing, pack those preconceptions away, and enjoy the brilliant Three Billboards. Frances McDormand and Sam Rockwell won Academy Awards, and they were well deserved.

Film exceeded my expectations. dialogue from the film: "I was thinking 'bout those street gangs they had down in Los Angeles, those Crips and those Bloods? I was thinking about that buncha new laws they came up with, in the 1980's I think it was, to combat those street-gangs, those Crips and those Bloods. And, if I remember rightly, the gist of what those new laws were saying was if you join one of these gangs, and you're running with 'em, and down the block one night, unbeknownst to you, one of your fellow Crips, or your fellow Bloods, shoot up a place, or stab a guy, well then, even though you didn't know nothing about it, and even though you may've just been standing on a streetcorner minding your own business, what these new laws said was you're still culpable.
You're still culpable, by the very act of joining those Crips, or those Bloods, in the first place. Which got me thinking, Father, that whole type of situation is kinda like your Church boys, ain't it? You've got your collars, you've got your clubhouse, you're, for want of a better word, a gang. And if you're upstairs smoking a pipe and reading a bible while one of your fellow gang members is downstairs fucking an altar boy then, Father, just like those Crips, and just like those Bloods, you're culpable. Cos you joined the gang, man. And I don't care if you never did shit or you never saw shit or you never heard shit. You joined the gang. You're culpable. And when a person is culpable to altar-boy-fucking, or any kinda boy-fucking, I know you guys didn't really narrow that down, then they kinda forfeit the right to come into my house and say anything about me, or my life, or my daughter, or my billboards. (Martin McDonagh )

don't mess with Mother love /// and also, this film actually challenges us to own what we condone. Throughout the challenge to passive denial cuts through for those with ears eyes and intellect to discern. A challenge to personal responsibility throughout. The message I got was, what are you condoning sitting passively by and denying any fault in the whatnot. You get it, I'm out, watch it and see if you squirm a little bit any parents out there? ........ love pce

loved the movie,would see it again.

humbleworm thinks this title is suitable for 16 years and over

007Gatsby thinks this title is suitable for All Ages

Lucik32 thinks this title is suitable for 18 years and over

Violence: throughout the movie

Coarse Language: almost in every sentence

Coarse Language: Present throughout the film

Many many quotes including racial slurs in IMDb already. Thanks to the posters who shared them:

Lyrics to the "Last Rose Of Summer":
'Tis the last rose of summer left blooming alone
All her lovely companions are faded and gone
No flower of her kindred, no rosebud is nigh
To reflect back her blushes and give sigh for sigh

I'll not leave thee, thou lone one, to pine on the stem
Since the lovely are sleeping, go sleep thou with them
Thus kindly I scatter thy leaves o'er the bed
Where thy mates of the garden lie scentless and dead