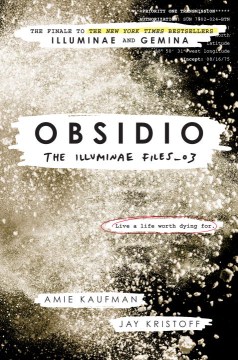 Picture the Star Wars screen crawl as I catch us up. The illegal mining operation on Kerenza IV has been co-opted with extreme prejudice by the BeiTech corporation. Our first book followed Kady and Ezra as they escaped on the Hypatia, headed for the Heimdall wormhole in an effort to get back to the center of the system. Book two, Gemina was the action aboard the Heimdall as another BeiTech crew tried to take over the wormhole to prevent anyone from Kerenza getting out and allowing their own teams through. They were thwarted by the team of Hannah, Nik and his cousin Ella. In Obsidio we meet up with our erstwhile heroes, as they meet up outside the remains of the Heimdall wormhole. The only way forward is back, as they use the Mao to return to Kerenza, much more quickly, to hijack the Magellan, a mobile wormhole platform. Meanwhile on Kerenza, many of the survivors are part of a resistance. Lo and behold, that includes Kady's cousin Asha and her boyfriend Rhys.

Here's my reactions to the books. First book: holy moly! This was the most creative idea and presentation in science-fiction I've read in years. Second book: Cool. Used the same characters with new names but I guess the setup is different...enough. This book: okay, I guess I want to see how it ends.

The amazing graphics weren't used nearly as effectively, in part because there wasn't a good way to use them here, so we get sign-size letters on a couple of pages that weren't necessary. Also, we're on round three of successful white hetero romance (okay, maybe Asha has tan skin, yippie). There is some representation thrown in, but it's not any of our main characters. And evidently only tough chicks in the army who act like men are allowed to sleep with other women. In fact, they all know each other! >_> Also, if you're in a wheelchair, you can be cool, but you're happy with someone just acknowledging your existence. That's all you need in life. I wish they had let the romance angle go unless they were willing to make it more than two-dimensional. </rant>

So, the series is cool. I like some of the ideas they tackle. If someone or something has to make the tough decisions we can't, is it wrong? Great job covering multiple sides of soldier mentality and the dehumanization of war. And in fact, I sound much angrier here than I felt as I read the book, because despite its issues, Obsidio as a stand-alone is still a unique and refreshing take on the traditional sci-fi novel. If you've read this far, it's worth finding out the ending and you'll probably like it!